Siam Royal View is a gated community of perhaps the most exclusive villas that you can find in the Pattaya area.

Located on the brow of a hill just a kilometre outside the city, Siam Royal View can be described as the ‘Hampstead of Pattaya’ due to the stunning views over Pattaya towards the sea fr om many of the villas and the project’s close proximity to Central Pattaya for anyone who wants a quick and easy journey to get into the downtown area.

Having been started back in 2005, Siam Royal View is a mature development and around half of the land plots have been sold already.  Here you choose your plot first and then decide which type of villa you would like built upon it.  Your villa will then be built to order within a period of 12-18 months.  The site of Siam Royal View slopes down at quite a steep angle in places.  For this reason, there are sea views from a large proportion of the plots on the site.  In some of the villa designs, the architects have used this natural slope of the land to create villas which contain rooms that are built into different levels of the hillside.

Read more
The smallest size of villa available at the project is the ‘Cascade’, a 181m2, two-bedroom bungalow which is priced at THB 7.1 million for the building alone, in addition to the price of the land plot, the cheapest of which start from THB 3.2 million.  The Cascade is the only villa design that doesn’t come with a private pool as standard – all of the other designs have pools included as part of the price  At the opposite end of the scale, it’s nearly a case of ‘the sky’s the lim it’.  From their standard designs, the top of the range is the ‘Sanee’, a 451.5m2 three-bedroom villa which costs THB 15.75 million.

If this still isn’t sufficiently large/exclusive/expensive for your needs, they also offer a bespoke model called the ‘Sawan’.  This vast villa can be anywhere from 800-2000m2 and can contain from four to eight bedrooms.

As with many other high-end resorts, Siam Royal View has communal facilities, including a large swimming pool with fabulous views from it.

If you are looking for an exclusive villa development with easy access right into the city centre, Siam Royal View could very well be the right choice for you. 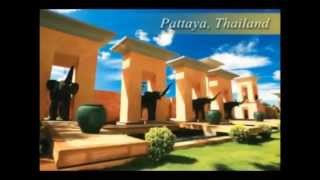